It’s about that time of the year. I can officially make all the soup in the world! Okay maybe not all the soup but a serious amount of soup will be made. However, this post isn’t meant to declare my love of soup.

I’ve been feeling a bit boring with my cooking lately. While I maintain a plant based diet, it’s not uncommon for me to feel uninspired or just completely over my bowl meals. That is when I tend to eat entirely too much toast with earth balance and that is not good for a balanced diet. So how do you find a way to get back in the game with food?

I take the child approach and sneak things in. I wish I could say that I love every vegetable under the sun but I don’t. Beets and I are still working on our relationship. Thus, I find soup to be a winning item. It’s such a great way to sneak things in and I don’t feel like I’m eating a tree. I know. I’m a terrible plant based kid.

With that being said, I wanted to share a few of my favorite recipes from the current season. I’ll warn you in advanced that not all of them are initially plant based. I tend to modify things for myself if it is a basic recipe I like. But nevertheless, here are a few of the current faves. 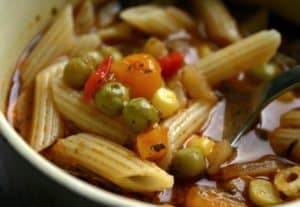 I’ve honestly been making this dish for years. If you aren’t dairy-free, you could totally leave the parmesan rind in. Plus, this soup is still good even if you don’t have all the veggies. Recently, I made it without the spinach and celery and my parents raved about it. Even the ladies at mom’s work wanted to try it. She had me bring a bowl one night to another nurse because apparently it was such a hit.

It’s a crowd pleaser. It’s also super versatile. You could add in other veggies as a use up. I make this recipe at least once every fall/winter. The one thing I would note is that if you aren’t eating it all in one serving I would recommend saving the pasta on the side. When you leave them together, all of the liquid gets absorbed into the pasta and it’s less soup and more of a veggie pasta.

Over the years, I’ll followed quite a few British bakers and youtubers. Slowly, I’ve picked up where we differ in how we identify things. For example, we have shrimp but they call them prawns. We have zucchini and they call it courgette. Confusing? Definitely. But eventually, it’s just like learning a new language. It automatically clicks in your head.

I made this dish the other night for my parents. I had a plate without the shrimp but they loved it. I would say that next time I might find a way to get a more cheese like flavor in it. I felt like it was missing something and I knew how I would fix it for others but not for myself. Hopefully, I can find a way around that next time but regardless it’s awesome for sneaking in veggies. 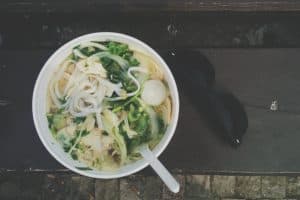 One of my favorite things about living in Atlanta was having so many food options available. There are still many dishes I have yet to try in the world and I loved stumbling on new places. A few years ago, a friend introduced me to pho. If you don’t know what pho is, I would say it’s like ramen but a billion times better. Typically, the broth is meat based. The dish is filled with broth, a few veggies, and your choice of protein. For whatever reason, I had a serious pho craving the other day. Unfortunately, the only place I’ve come across in my new home that has pho is a bit of a drive. Plus, I’m not sure if they have vegetarian/vegan options.

But I made this recipe the other night and loved it. I’m partial to any recipe that allows me to use fresh ginger. I also love noodles and veggies if you haven’t figured that out yet. I will say I did cheat a bit and use the vegetable bouillon I store in the fridge. Overall, it was awesome. I’ll definitely be making it again.
Do you have any recipes you’ve been loving lately? Leave a note below and let me know.